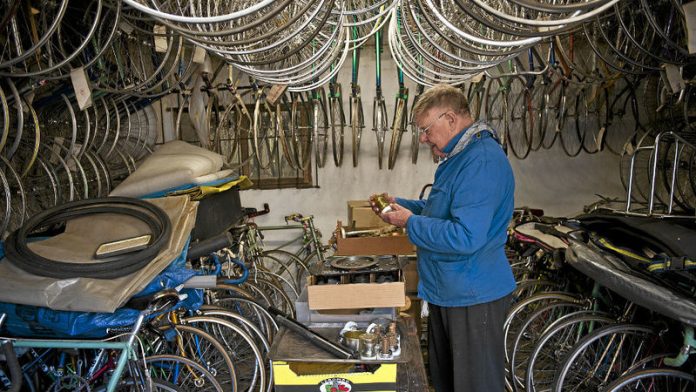 It’s Friday August 30 and the last rays of sunlight have disappeared behind the smoggy skyline in Braamfontein near the Johannesburg city centre.

On the corner of De Beer and Juta streets, the smell of smoke, beer and sweat hang in the air. Under the dim street lights, several hundred cyclists straddle their bicycles. Some are the “serious” cyclists–they wear padded Lycra riding pants, reflective zip-up tops and peddle streamlined, gleaming mountain bikes.

Then there are the “other” riders. They ride in skinny jeans and Converse sneakers: the slim-tee, scarf-and-sports-jacket riders. They cradle Savannahs and wheel around bikes wound with fairy lights or adorned with streamers.

Far from their lightweight aluminium and carbon counterparts, the “other” riders’ bicycles are made of steel. They lack the sophisticated gear systems and hydraulic brakes of the mountain bikes. Instead of 21 or 30 gears, most steel-frames have one or three. Some don’t even have brakes for the front wheel. And in the case of the fixies, they use a simple, reverse-motion resistance braking system for the rear, the cog being directly attached to the hub of the wheel.

But these “fixies” (fixed-wheel bikes) have another brand of beauty, one admired by their hipster owners. They have an air of authenticity that comes with age. They are the steel-framed vintage bicycles, and they are the symbol of a surging international trend that combines the growing fashion of cycling with the pervasive craze of hipsterism.

The increasing number of cyclist commuters

With cycling’s surge in popularity worldwide, it is little wonder that the phenomenon has reached our shores. The Netherlands, with its traditionally cycle-centric culture, has seen a 45% increase in the number of cyclists since 1980, statistics from the European Cyclists’ Federation show.

Between 2000 and 2010, the number of cyclist commuters in San Francisco went up by 75% and those in New York went up by 61%, according to the League of American Bicyclists. London’s increase has been even more extreme, with a 91% surge in cycling during the same period. Parts of Asia have also been gripped by the craze: the number of cyclists in Singapore almost doubled in just one year, between 2011 and 2012, according to the country’s cycling federation.

And, as quickly as cycling is catching on, the vintage bike trend is following. “It’s an interesting thing,” says Melvin Neale, the organiser of Critical Mass in Johannesburg. “When we started Critical Mass in 2011, there were hardly any vintage bikes. Now they are everywhere.”

Neale sits on a bar stool at his Braamfontein cycle shop, Hunter Cycles, wearing a plaid collared shirt with the top button done up and a baseball cap. The walls are hung with old-school handle bars and steel bicycle frames in siren reds, greens and blues.

To satisfy the growing appetite for vintage-inspired bicycles, “a lot of modern manufacturers are making steel frames again,” says Neale.

But there was once an era in which these frames were not produced en masse and imported.

There was a time when South Africa rejoiced in its own industry of hand-made bicycle frames. It was a trade that was once rich in South Africa, and has now all but disappeared: the age of the master frame builder.

In that era, a group of highly skilled, specialised South African artisans practised the art of bike-making.

Ron Thompson, the former competitive cyclist, knows all about it. Apart from owning the keys to eight garages full of authentic vintage bicycles and bike parts, he holds the memories of a different time.

The first thing Thompson showed us when we walked into the darkened clutter of his garages in Johannesburg was the intricate workmanship of rows and rows of bicycle forks hanging on the walls. Although most bikes today–even those that cost more than R50 000–are made with mass-produced forks imported from China, those on Thompson’s walls are individually crafted and delicately engraved. Like most artistic masterpieces, the decal on the down tube bears the mark of its maker.

Steel frames, says Thompson, last five or 10 times longer than their counterparts–and the number of bikes in his collection attest to that.

There are hundreds of them–some perfectly restored with a pearl-like gleam; some stripped, their grey-blue steel lines rugged and raw; some bearing frayed seats kept together with twine–workhorses gladly swapped by commuters for something newer. But almost all bear the mark of a trade that is now all but lost to South Africa.

In 1948, Willie Deale, a real estate agent, and Hans Huth, a baker, began Deale & Huth Cycles in Main Street, Johannesburg. They began by importing frame sets but, in 1955, Huth decided to start building frames under his own DHC brand.

Huth was “largely a self-taught frame builder”, says Thompson. “To begin with, he built his DHC racing bikes in the basement of his cycle shop. His early production was low since he built for relatively few riders.”

In 1963, Basil Cohen took over the business. After a short while at the helm, he saw a gap in the market. Until then the company had been providing bicycles to competitive riders but Cohen’s idea was to produce a low-cost bicycle–”to make cycling affordable to people who did not necessarily want to race,” he said.

“At first Huth would not hear of it but I eventually convinced him to manufacture a reasonably priced bike … an economy steel model with South African Bartons mild steel tubes under the marque of ‘Supersport’. To my great delight, the DHC Supersport took off,” Cohen says.

Six Supersport models were sold for every one high-end DHC bike. Local bike-making was in its heyday and DHC was riding the wave.

In the same year that Deale & Huth was started, Francois du Toit was born in the Cape.

“I’ve got a love story with bicycles,” says Du Toit (65). “I was set to play rugby, with my dad being a rugby fan. But when I got on my bike, it felt like freedom. My dad said ‘no way’. So at the age of 14, I started collecting and selling newspapers. I earned enough money to build a bike of my own.”

Years later, Du Toit was a successful competitive cyclist and working as a regional manager for Peugeot bicycles in the Cape. It was then that he began to realise his dream.

“I said, ‘You know what I want to do in life, I want to actually build my own bikes.’ I took my savings and went to France. We made contact with the Le Jeune brothers [acclaimed frame builders in France].”

Du Toit trained under the artisans for four months, before returning to South Africa and starting his own business producing Le Jeune bikes locally, using steel tubing imported from Reynolds, the British supplier.

The handmade side of business diminished

The individualised bikes were “like the equivalent of a Rolls Royce”, he says. Du Toit made racing bikes, large-framed bikes and the first ever tandem to win the Argus.

“All the big [cycling] names were at some time in their life riding on Le Jeune bicycles,” he says.

Eventually Du Toit earned his master frame builder diploma through Reynolds. “There were only about 10 people in the world who had that qualification at the time,” he says.

Though the number of bicycle riders did not increase dramatically in the 1970s, the decade saw builders such as Du Toit, DHC and Peugeot “building some great bikes”, Thompson says.

“This was possible with the help of overseas financial assistance from those principals who supplied technical needs, trade connections, plus know-how and news of the latest trends.”

But in the late 1970s and early 1980s, amid political unrest, sanctions and a weaker rand, Le Jeune saw its profits waning.

“At the time, we were supplying department stores with Le Jeune bikes. We were negotiating to export to the US. But I decided it was going to get worse, with labour issues and the weaker rand.

“Demand dropped because people didn’t have the money to buy these things,” Du Toit says. The handmade side of the business became “very small”.

His story is mirrored by that of another builder, Bill Lange–”one of most meticulous builders I ever met”, Thompson says. “A sign on the wall reflected his philosophy. It read ‘One measurement is worth a thousand opinions’.

“Further testament to Lange’s approach was his fully equipped workshop–so clean and tidy you could eat off the floor. In my opinion, he was the best, and his frames bear witness to his passion for building, a skill he learned in the States.”

But the gifted artisan is no longer in the business. “Bill doesn’t sell any more. He could not afford to sell to dealers at a price they could then mark up to sell at and there was not enough direct demand for his craft to sustain the business. Bill was too much of a craftsman to be willing to sacrifice precision for speed or profit,” Thompson says.

Du Toit’s words have a similar ring to them. “Things have changed quite a bit nowadays. There’s too many other people making bikes faster and cheaper,” he says.

Thirty-nine years after he began selling his first handmade bikes, Du Toit still builds bikes in his workshop, but only “for the love of it”.

People want things that can last

At Critical Mass, the growing demand for hand-made steel frames is very much in evidence. Take Garfield Taylor, who bought his coal-black 1923 vintage Sunbeam bike at a bicycle jumble sale outside London. “It has become a trendy thing to ride a fixie,” he says. Dressed in a waistcoat, breeches and a leather helmet with goggles, he lights a paraffin lamp on his bike with a match and strokes the black polished-rust of his crossbar. “You get more of a sense of being connected with the machine.”

Neale says a similar thing. “People want something that will last a long time and that they can build affection for,” he says.

Thompson knows of at least seven bicycle shops in the country–five in Cape Town and two in Jo’burg–that are buying and selling vintage bikes.

When Werner Strauss, a hoodie-wearing Critical Mass regular who is cradling a beer, hears that frame builders in South Africa still exist, he becomes excited. “That’s what I’m looking for! I want someone to make me an old balloon bike with double tubing on the top,” he says.

Du Toit has noticed the trend as well. “This is the in thing now. The steel bike might come back to its own again.”

With that in mind, are there any young, up-and-coming frame builders in the country? “Not that I know of,” Du Toit says. “We are from another era.”

SA bicycle-frame builders from the 1960s to present

Griffin Cycles (Late 1960s to early 1970s):
Said to be the forerunner of all bike manufacturing in South Africa, this small shop produced hand-brazed framesets by builder Bill Griffith. They used a breakthrough method of soldering, which proved too expensive to be commercially viable.

Hansom/Peugeot (1967 to 1980s):
Bike-maker Gotty Hansen teamed up with French businessman Ettiene Somorjal to establish Hansom cycles. This pair subsequently obtained the licence to produce bicycles under the Peugeot brand. Hansen’s bikes were also produced under the Zini brand.

Alpina Cycles (Late 1970s to 1980s):
Peter Moni (of the family that established pasta company Fatti’s and Moni’s) and Basil Cohen paired up to produce hand-brazed frames with imported jigs, in an effort to keep local labour costs down.

Deale & Huth (1948 to 1967):
Started by Willie Deale and Hans Huth, these bikes were built under the DHC brand and were regarded by many as the iconic South African bike brand.

L’Ange (1970s to early 1980s):
Made by Bill de Lange and known for superior craftsmanship.

Gemini Cycle Craft (1990 to early 2000s):
Presided over by Duncan MacIntyre, who started out at DHC and used Reynolds tubing to make custom track, road or triathlon frames.

This article was originally published here.